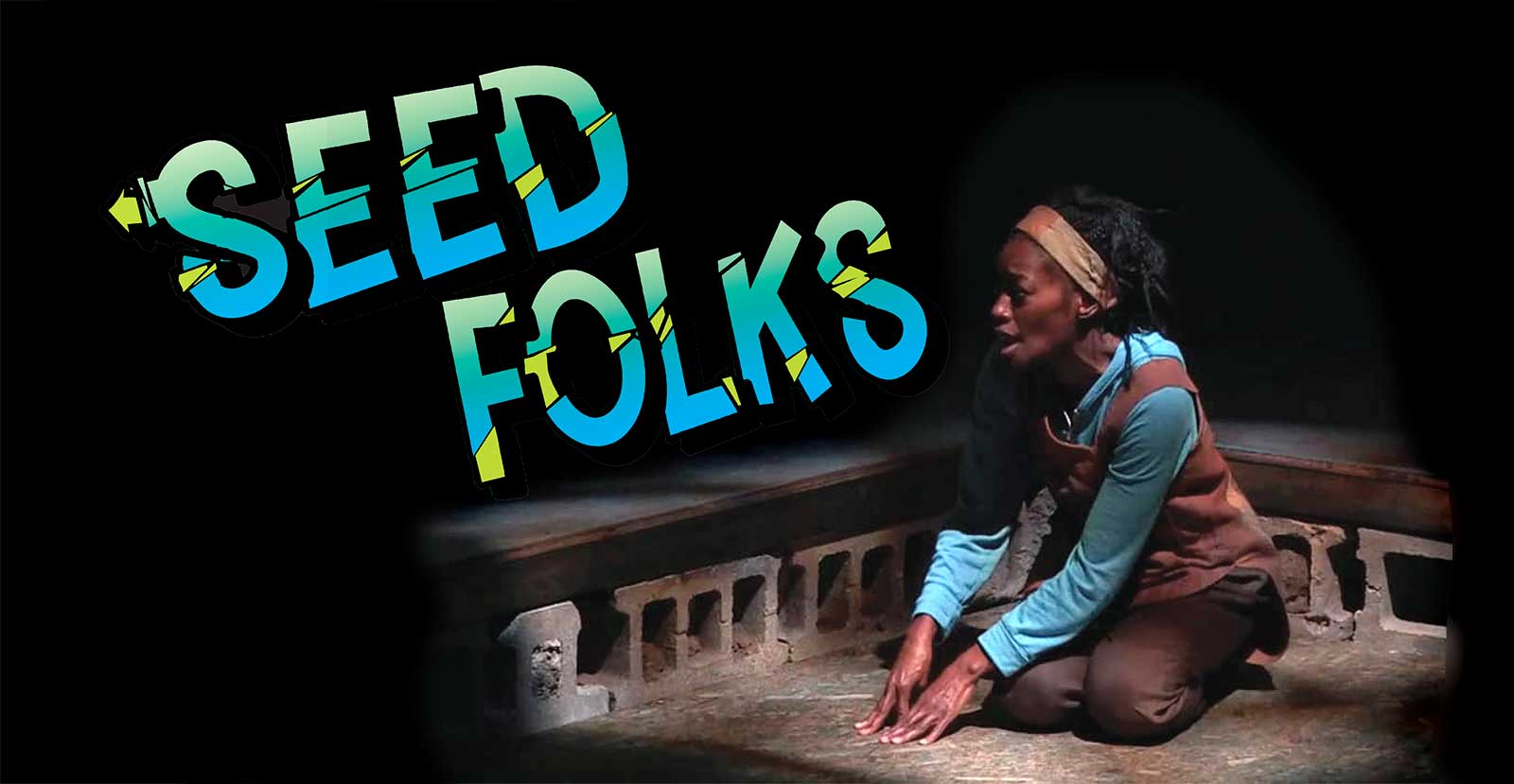 When Kim decides to turn the rat-infested lot next to her apartment into a place to plant some beans, she activates each and every member of the community around her. Unflinchingly honest and unabashedly heartwarming, Seedfolks is filled with raw, inspiring stories you’ll never forget. Slowly, the people around Kim begin to sow seeds of hope amid the dirt and grit, tending dreams to full bloom. Ivey Award-winning actress Sonja Parks brings more than 20 characters to life as stunning projections and animation bring Fleischman’s world to life. An accomplished actor, Sonja has worked both regionally and Off-Broadway with/at many notable national and international venues including: The Public Theatre, Playwights’ Horizon, The Kennedy Center, The Boston Center for the Arts, The Guthrie Theatre, The Royal Shakespeare Company-London, Penumbra Theatre, The Children’s Theatre of Minneapolis, The Walker Art Center, Links Hall-Chicago & The Playwrights’ Center.

She has extensive television, commercial and film credits and has worked with some of the leading professionals in the industry including: Angelina Jolie, George Clooney, Martin Sheen, Faye Dunaway & Gloria Ruben.

She was an original member of Doris Duke Fellow and poet/playwright Sharon Bridgforth’s celebrated root wy’mn theatre company, touring nationally with the company for 3 years and was the featured performer in two one-woman shows; one of which was nominated for an Osborn Award by The American Theatre Critics Association.

Sonja is the recipient of a 2000 National Endowment for the Arts Grant; a 2002 Minnesota State Arts Board Fellowship; a 2005 McKnight Artist Fellowship; was named “Best Actress in the Twin Cities–2004; has two Minneapolis Ivey awards (Acting-2009 & Directing-2010); a 2014 Minnesota State Arts Board Cultural Collaborations Grant; is a 2014-2016 TCG/Fox Distinguished Achievement Resident Acting Fellow; a McCarter Theatre Center-Princeton/Sallie B. Goodman Fellow; has been a featured artist in Time Magazine; and was named “One to Watch” and one of “Seven Artists You Must See” by American Theatre Magazine.

She studied at The University of Texas, The Dance Theatre of Harlem and The National Black Theatre under the direct tutelage of it’s founder and artistic director, the late Dr. Barbara Ann Teer.

A committed Artist/Activist, her desire to improve society for all people(s) but especially those of the African Diaspora has led her to many parts of the world including: Lagos,Nigeria; Accra, Ghana; Berlin, Germany; Reykjavik, Iceland; Havana, Cuba and Cape Town, South Africa.  Her panel, “Race, Colonization & Art: An Afro-Global Perspective”, was featured as part of the Theatre Communications Group/Global Theatre Initiative’s inaugural International Conference, a gathering of arts professionals  from across the globe at Georgetown University in Washington, D.C.

She taught acting and theatre skills for 6 years at the University of Minnesota as a member of the Theatre Arts faculty where she also conceived and spear-headed the development of the BA Mentoring Program (also known as BAM) which is now an integral component of the Bachelor of Arts training.  Also at the U of M, she piloted and taught a lawyer training course in conjunction with the Mondale School of Law.  She further developed the program to assist licensed attorneys in improving their courtroom, interviewing and public speaking skills.

She has been a teaching artist-in-residence at Hampshire College, Amherst, MA; DePaul University, Chicago, IL and The University of Cape Town, South Africa.

Her  book detailing her performance methodology based in the “Theatrical Jazz” aesthetic will be published in the Fall of 2018.

JOY DOLO (Understudy) played in The Snowy Day and other stories by Ezra Jack Keats, Pinocchio, and The Last Firefly on the Children’s Theatre Company stage. She has performed with the Jungle Theater, Ten Thousand Things, Sod House Theater, Frank Theatre, Park Square Theater, Pillsbury House, Theatre Pro Rata, and Transatlantic Love Affair. She is a founding member of Blackout Improv Comedy, the only all black comedy troupe in Minnesota. She is a recipient of a 2014 Ivey Award. She is in love with her animals, Dr. Purr, Princess Caroline, and Dame Diedre.