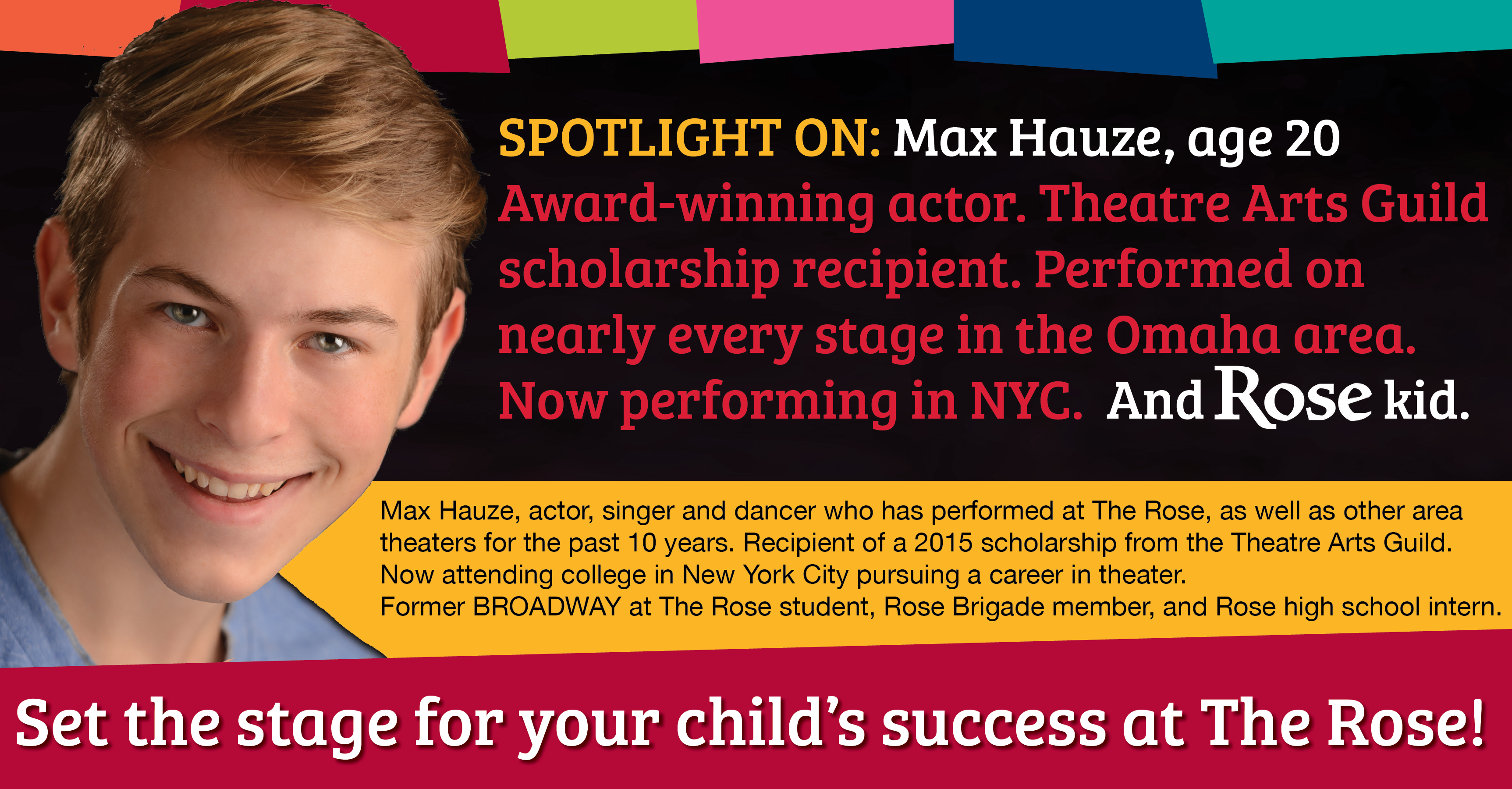 This piece is part of a series showcasing Rose students past and present.

When you bring your child to The Rose, you never know where the experience will lead. They may grow from a shy child into a lead actor on the main stage. Or maybe the skills learned on that stage will help them get accepted into the school of their dreams.

An arts education teaches kids to use their imagination to innovate and problem-solve in ways that transcend the stage and lead to a successful life. Here’s proof.

The following blog post is written by Max Hauze. Max has been involved in everything from dance classes to Broadway at The Rose and even to the main stage here at The Rose Theater. He currently is pursuing a career in acting through his undergraduate studies. But before he was on the path to become the next great actor, he was a Rose kid. Here is his story.

As a kid, I was on the shy side. Always into my own imaginations and pretending the world was different than it actually was. Not only did I spend a significant time in my imagination, I could also often be found acting out Disney movies while they were playing. It wasn’t until later that I realized that I could do this not just in my living room, but on stage where people would come and be forced to sit and watch me become these characters. While my love of my own imagination and various Disney characters may have seemed a little odd, it was what lead to my love of being on stage and performing. I was able to express all of my weird imagination out in a space where it was welcomed and even praised. This pattern continued and around the age of twelve when I was able to do my first professional production. Through this I saw that people actually did this as a real career and knew that I wanted to make performing my life’s work for the foreseeable future.

My first involvement with the Rose was around the age of nine.

I didn’t realize it at the time, but the building blocks of what would later become my main passion were beginning to be laid.

My first class was Harry Potter and while what I thought I was doing was just being silly and “pretending” to be a wizard was actually paving the way for my future. I took a few more classes after that, but I didn’t start doing Broadway at The Rose classes until my third Main Stage show. After this, I started taking dance classes, which I hated at the time and didn’t see their relevance, to which Sue showed me otherwise.

I feel like I have been very successful and lucky throughout my theatrical experience, but the moment or accomplishment I am most proud of is getting accepted into my school. The program is very selective, but besides that, I really enjoy the way they teach the arts. It’s very thorough in every separate area (dance, voice, acting) but also connects the three very well. I feel that my greatest accomplishment is being able to study something I love at a school I love and takes me and my career choice very seriously.

Theater has literally taught me everything I know at this point in my life, both on and off the stage. For example, I did Charlotte’s Web at The Rose in 2015 and I had to miss the last two months of my senior year of high school. While I did not attend school in person, I still had to get my assignments done. I decided that it would be easier to take my time and do them well so that I could get them out of the way and focus on the show.

It was the theater that gave me the type of work ethic necessary to succeed all throughout life.

Theater has had a great impact on my life. It has taught me to never apologize for who I am and how to be responsible in more ways than one. It has also played a large role in making me better at not only sympathizing with people, but empathizing with them as well.

From that shy kid who acted out Disney movies all the way to performing on a Main Stage and pursuing acting in school, theater has played a pivotal role in my growth as a person.