A Letter From The Purple Desk... 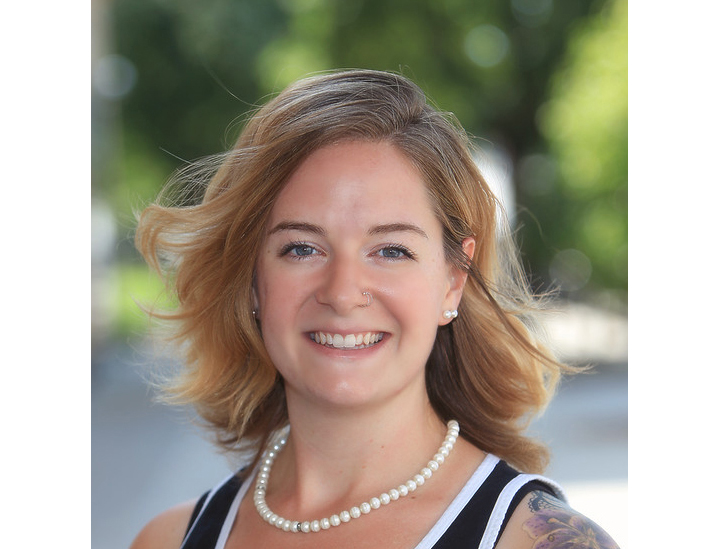 A Letter from the Purple Desk… or the Brown One… or No Desk at All. Hey there. I have been tasked with writing a reflection blog about my time spent at The Rose Theater. It can be about my time this summer working in Marketing, or it could cover the almost two years spent on the Production team, or both. Honestly, for me, one does not exist without the other—and either way, I think it might be easier to climb Mount Everest than to actually write a reflection about my time here that isn’t a novel, or a short memoir at the least. But alas, here I am, giving the people what they want. After all, I aim to please.

The past two years of my life have been, well, productive, to say the least. And that’s not just because I was a part of a team—the Production Team—that put up an 11-show production season. Twice. But let’s be real, that was some good word play, amiright?

In all realness though, these past two years have done nothing but teach me, challenge me, help me, inspire me and allow me to learn lessons and gain experiences that I would not have otherwise had. My time here was special. I don’t just mean that it holds a special place in my heart or that it meant a lot to me—though it did and will continue to for years to come. I mean that my time here was spent under special circumstances. Never did I expect to endure the challenges that were thrown my way when I signed that contract over two years ago. After all, I signed on as a Lighting/Sound Apprentice—and here I am finishing my last day tying up as many loose ends in the Marketing Department as I can.

So how did I get here? For starters, as I briefly mentioned already, I started my contract as the Lighting/Sound Apprentice for the 2015-16 season in August of 2015. Kyle Toth was the Director of Lighting and Sound at the time—and boy was I surprised he picked me to be his apprentice. Surprised and honored. I’m still honored—every day. I came from a small private Christian school in Tennessee and did not expect that I would be entrusted with so much when I received the phone call being offered the position. Within the first half of the season, Kyle gave me every opportunity to show him what I could do— and naturally, I did everything I could to prove to him that I’m capable. To my surprise, I was able to achieve more than promised within the first 4 shows of the season as he allowed me to take on the responsibilities of Master Electrician, Assistant Lighting Designer and Associate Lighting Designer. I didn’t think I would be given that opportunity until significantly further into the season. It made sense once I realized that Kyle would actually be leaving midway through the season—leaving me to my own devices. Specifically, my cellular device that allowed me to call and text him anytime I found myself unsure of what to do or completely confused. Though I can’t help but admit that I didn’t have to make nearly as many phone calls as I thought I would. My favorite was when I would text Kyle a question about the sound equipment or any issue and I would actually be able to answer my own question by explaining the issues to him. His most memorable response: “I love it when you answer your own questions.”

But I made it. I did it. For half a season I proved to myself over and over again that I am capable. I also learned that when I’m frustrated, I don’t communicate well. Yet I work extremely well under pressure, except when I’m being watched. There is such a delicate balance to being someone who is young, determined and confident but also striving for approval, and afraid to screw up. But I did it. I grew so much professionally. I learned so much more than I ever thought I would. It’s an experience I don’t think I would change—even though it was stressful and I lost a LOT of sleep. But legitimately, what I got out of it was far more important than the sleep that I lost. So what DID I get out of it? Well, I got ridiculous amounts of experience. I learned how to communicate with outside designers. I learned how to troubleshoot SO MANY THINGS. I learned that I have what it takes to actually do this for a living. I learned that it’s okay to be frustrated. I also learned that there are a lot of ways to deal with said frustration. I got some really good professional contacts! And you know what else I got? Aside from the million other things that I can’t even put to words… I got a job.

That brings me to year two. When I signed my contract as a Tech Apprentice, I was going in assuming this would be a one-year job and that I would be on my way once we opened The Little Mermaid in the summer of 2016. I was a little bit wrong. I guess they liked me so much they couldn’t stand to see me leave (at least that’s what I tell myself) so I was hired on as the Associate Director of Lighting & Sound. This was really exciting to me for so many reasons. First of all, this meant that I got to design shows for the mainstage. I had been itching to design for the year prior and this was going to be my time to shine.

My time to shine lights on the stage.

See what I did there?

But really, I couldn’t wait to get back behind the lighting console and do the thing that I love so much. I also found out that I would get to design The Jungle Book, which was such an exciting thought and proved to be an amazing experience for me. In the time that I spent not lighting my four shows, I was responsible for doing the sound designs for the remaining five. Of course, I am not the most knowledgeable person when it comes to Sound. I’ll be the first to admit it. But I enjoyed it. I loved the experience I got from it. And I know how to use the sound equipment so much better now than I knew at the beginning of the season—and I thought then that I had a pretty solid understanding. The more you know, right? Of course, the 2016-17 season presented many challenges of it’s own. Some were expected, some not so much, but even so I gained a great great deal in my second year at The Rose. I learned about lighting and sound, of course. But I also got to work with some amazing directors. I got to see different methods of design and watched so many ideas come to life. And much like any experience, there was plenty of not so great stuff that accompanied the good. But that’s necessary right? Without challenges how do we grow? Without confusion how do we seek answers? I am leaving this place with so much more knowledge, understanding, and experience than I thought even possible for such a short time. For that, I am grateful. I bet you’re wondering how that gets me to Marketing, eh? Well for a while I have been trying to figure out what my next step is. When I finally figured it out, I realized that my time here is about up and I need to move on to a new adventure. So I’m moving to New York! Yay! That meant that I would have a period of time once Peter Pan opened that I wouldn’t have much of anything to do. Lucky for me, I have a degree in Public Relations as well as Theatre, so I did a little bit of schmoozing and asked if I could maybe finish out my time here in the Marketing Department. I though it would be good for me to get a change of scenery (I got a window!) and to brush up on my PR skills. After all, I’d hate to go throughout life and never make use of MANY hours I spent pursuing that second degree. Plus, I figured they could use some help up in Marketing. Which by the way, I was right. They do so much! I had no idea that they had so much on their plates constantly. I am so beyond glad that I was allowed to join them for the summer and help out. I also got to see a lot of my favorite people every day and if that’s not a wonderful way to end my time here, I don’t know what is.

So here I am. About an hour and half from walking out of this building “for good.” I have learned so many amazing things, I have grown, I have laughed, I have cried, I have met some of the most amazing people in the universe, I have been able to beef up my resume (that’s always a plus) and I have acquired the tools that I believe I’ll need in order to go out and kick this world in the face. But like, in a good way. So I leave you with these words by Henry David Thoreau:

“Go confidently in the direction of your dreams..,” at least, that’s what I’m going to do.